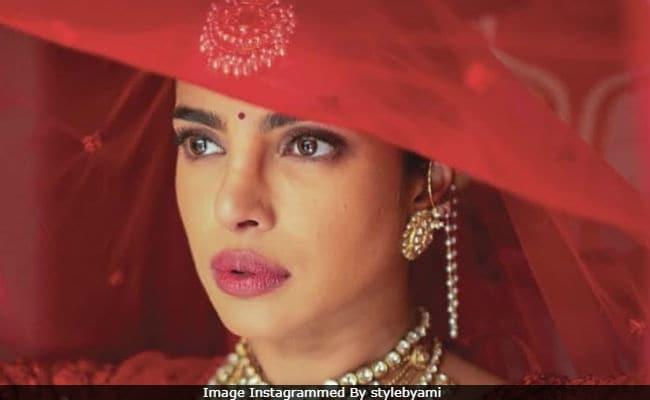 On Thursday, celebrity stylist Ami Patel treated us to some breathtaking pictures from Priyanka Chopra and Nick Jonas' wedding, which happened over the weekend in Jodhpur. The photos are from the couple's Hindu wedding ceremony. Priyanka wore a red Sabyasachi lehenga for the wedding and Nick a golden sherwani. She accentuated her look with diamond jewellery. In the pictures shared by Ms Patel, one is a solo photo of Priyanka in which we can see a close-up of her bridal look. Priyanka opted for a light make-up to go with her red outfit. "A vision," Ami Patel captioned her post.

In another picture, Priyanka can be seen walking towards the mandap, escorted by brother Siddharth Chopra and others. "Princess Priyanka Chopra," wrote Ami Patel.

Our personal favourite is this picture of Priyanka with husband Nick Jonas, mother-in-law Denise and brother-in-law Frankie. Priyanka and Nick hold each other's hand and pose for a photo. The kaleerein adds to her bridal look. "Can you take your eyes off this image," read the caption.

Can you take your eyes off this image @priyankachopra and @nickjonas in @sabyasachiofficial and shoes by @louboutinworld.

Sabyasachi had earlier shared a detailed description of Priyanka's wedding lehenga and jewellery. In an Instagram post, he revealed that it took 3,720 hours to create the "modern masterpiece." "As an ode to the resplendence of Mughal jewellery, her wedding jewellery was crafted with uncut diamonds, emeralds and Japanese cultured pearls in 22 karat gold and had delicate tiny stars in uncut diamonds to give a sense of whimsy to an important traditional piece," he added.

Priyanka Chopra and Nick Jonas married at Umaid Bhawan Palace in Jodhpur. They first married as per Christian rituals and later a Hindu wedding ceremony was held.